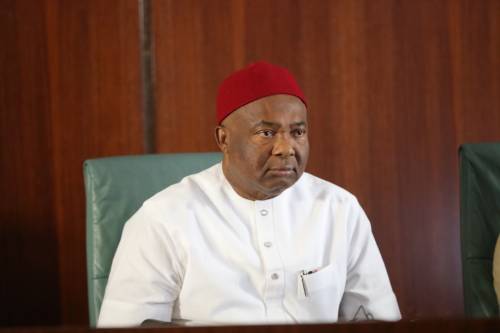 The Governor of Imo State, Hope Uzodimma, has expressed optimism that having performed very well, the 22 All Progressives Congress state governors will deliver their respective states to the party in the 2023 presidential election.

The Imo Governor, who was in Daura along with eight other APC governors to pay Sallah homage to President Muhammadu Buhari, made the claim while addressing journalists after a closed door meeting on Monday.

Uzodimma said: “22 Governors will deliver 22 states because they have done very well.”

On the choice of former Borno Governor, Senator Kashim Shetima as Bola Tinubu’s running mate, Uzodimma said it was a collective decision and they are pleased with the outcome.

Similarly, Kebbi State Governor, Atiku Abubakar Bagudu, said the choice of Shettima as Tinubu’s running mate was a pleasant surprise, describing the former Borno’s Governor as one of Nigeria’s finest.

According to Bagudu, the Tinubu-Shettima presidency will complement all the achievements of the last seven years under president Muhammadu Buhari.

The eight Governors who visited President Muhammadu Buhari in his Daura hometown for the Sallah include: Nasir El-Rufai of Kaduna, Atiku Bagudu of Kebbi, Aminu Masari of Katsina, Abdullahi Ganduje of Kano, Abubakar Bello of Niger, Kayode Fayemi of Ekiti, Simon Lalong of Plateau and Abdullahi Sule of Nasarawa States.