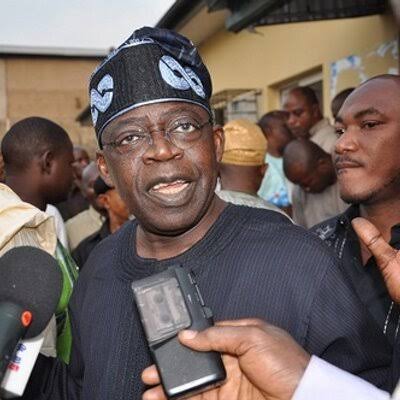 “What if he opts for Muslim-Christian ticket in the end? Why don’t you wait for him (Tinubu) to announce his plans,” Tinubu’s media aide, Tunde Rahman, told Sunday Vanguard last night.

Rahman added: “He (principal) is a God-fearing man and a detribalised Nigerian. He will be fair to all. There is no cause for alarm”.

Meanwhile, Governor Abdullahi Ganduje of Kano State, believed to be a close associate of Tinubu, said, on Friday, that the APC presidential candidate will pick a Muslim running mate.

Ganduje himself is a northern top politician believed to be among those being projected to run with Tinubu.

He made the comment during a gathering of about 100 clerics at the Kano State Government House as part of activities to mark Eid-el-Kabir.

“We have advised him to pick a Muslim deputy and he has agreed. A Muslim-Muslim ticket is a reality. It is not something new in Nigeria,” Ganduje said.

Reacting, Elder Biodun Sanyaolu, Assistant General Secretary, CAN, condemned the Muslim-Muslim presidential ticket, saying the move would not be supported by Christians.

On whether Tinubu has reached out to the association, Sanyaolu, “Not yet, CAN has made it’s position known that Muslim-Muslim ticket will not be supported even Christian-Christian ticket.

“It is not about Muslim-Muslim ticket or Christian-Christian ticket it is the mistrust existing in us for the last seven years which has been so terrible even with Nigeria inter-Religious Council, NIREC.

“All we are saying and want is the leader that will do well to everyone, irrespective of class, religion, sex, region, colour, among others.

“All we are craving for is a leader that will be fair to all Christians, Muslims and evan Traditionalists.Poverty doesn’t know religion.

“If there is a bomb blast it will kill whoever is on its way not minding religion. We want good leadership that will be fair to all and good governance in Nigeria.”

Speaking on whether the association will listen to APC when campaign starts, Sanyaolu said: “If he comes, we will welcome him and take a look at what they have for Nigerians and the public.”

Also speaking on the matter, CAN’s General Secretary, Joseph Daramola, insisted that Tinubu’s running mate should be a Christian from the North.

He stressed that anything contrary would mean that APC does not bother about the unity of the country.

“We do not subscribe to a Christian/Christian ticket or Muslim/Muslim ticket. The extant Nigerian Constitution promotes religious balance.

“The running mate for the APC presidential flag bearer, Asiwaju Ahmed Tinubu, should be a Christian from the North,” he told Sunday Vanguard unequivocally.

Daramola explained that there are capable Christians from the North in the APC who can make the dividends of democracy and good governance available to the people through quality leadership.

On whether there had been consultations between CAN and the APC or any other political party with regards to the choice of vice-presidential candidate, he said: “We recognize the right of political parties to decide on who becomes their candidates for general elections.

“The constitution and the electoral law have granted the members of the parties the exclusive right to choose the candidates that citizens will vote into political offices in 2023”.

Speaking also with Sunday Vanguard, the President of FCT Baptist Conference, Rev. Dogara Raphael Gwana, said: “We join other well-meaning Nigerians, especially the Christian Association of Nigeria (CAN) to state unequivocally that such action (picking a Muslim running mate) is most unfair and unjust. It is not in keeping with the principles of fair play and equal representation to go this path.

“We heard the governor of Kaduna state making statements to justify this and citing the fact that he did same in Kaduna.

“What he has failed to state is how that action had helped in uniting the state. We live in Nigeria and we know that there is no state in Nigeria is perceived to be as polarised as Kaduna.

“The state is bleeding and is being overtaken by terrorists yet the governor comes to national media to justify an act that is condemned by all even including some of his revered Islamic clerics.

“We call on the APC presidential candidate to aim at healing the country and apply wisdom in the actions he takes towards selecting his running mate.”

And for Rev. (Dr) Innocent Rubiruka Solomon, Senior Pastor of Crown of Life Bible Church, in recognising the place of faith in the quest for quality leadership, Tinubu must resist the temptation of religious chauvinism and selfishness..

“Religion is to guide the people and the nation and not to set the people against each other. Political decisions must be fair and just. Democracy must be all inclusive. Christians, Muslims and people of all faiths must be duly recognized and carried along.

“Christian -Christian ticket or Muslim – Muslim ticket is not in the interest of a united, peaceful and prosperous Nigeria,” he told Sunday Vanguard.

Ladoja appealed to Nigerians to shun religious acrimony as 2023 general elections are fast approaching, saying what matter most is for the best candidates to emerge during the elections..

Addressing newsmen at his Bodija residence, the High Chief of Ibadanland said there were many factors involved in electing Nigerian President.

“There are many factors involved in electing President. Whoever wants to be president and those working for him have to go extra miles. In fact, they will need more prayers as they are consulting.

“With all these efforts, God has the final say on who becomes the president. Chief MKO Abiola who was a Muslim was elected alongside his vice, a Muslim. We only need to pray that if Tinubu wins, it will not be like that of late Chief Abiola.

“I don’t see anything wrong in Muslim-Muslim ticket because I don’t intervene in religion matters. Muslims and Christians are from the same father