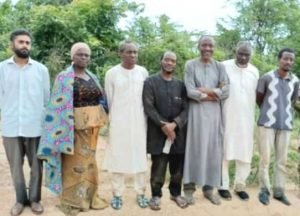 A military insider told reporters that Bosede Tuwase is part of the seven hostages released on Saturday.

New revelation has been made about the identity of the Abuja-Kaduna train kidnap victims who were released by terrorists recently.

It has been revealed that the wife of a top Nigerian military officer is among the freed Abuja-Kaduna train kidnap victims.

A military insider told DAILY POST that Bosede Tuwase is part of the seven hostages released on Saturday.

The woman is the wife of Air Vice Marshal (AVM) Olurotimi Anthony Tuwase.

“A Pakistani and Bosede Olurotimi are among those released. She is AVM A. O. Tuwase’s spouse.

“We all knew since but the information was safeguarded,” the source said.

Tuwase is the Commandant, Armed Forces Command and Staff College (AFCSC) in Jaji near Kaduna.

He assumed the position in January 2022 when the Nigerian Air Force (NAF) announced new postings and redeployments.

The ‘AK9’ train operated by the Nigeria Railway Corporation (NRC) was brutally waylaid by insurgents.

It was attacked the night of Monday March 28 at a location between Katari and Rijana.

The terrorists are still holding dozens of captives more than 110 days after the Kaduna ambuscade.