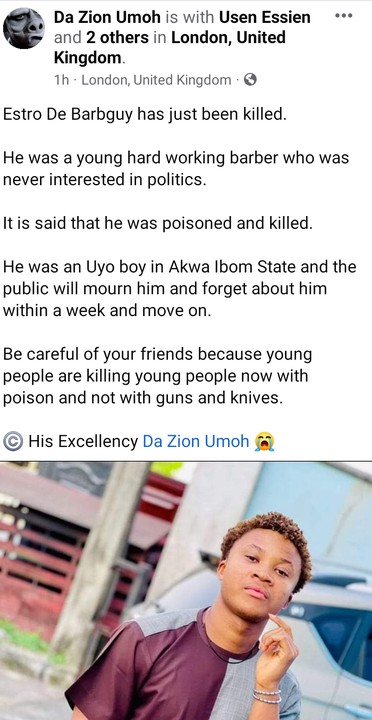 A young barber based in Uyo, Akwa Ibom State, identified as Estro De Barbguy has died after he was allegedly poisoned.

He was said to be one the best barbers in Uyo.

Meanwhile, friends have taken to Facebook to mourn his death.

Kasaprince Michael Junior wrote:
“Since yesterday I have been very down to the lowest level I can’t sleep �
Hearing the news of my barber passing away
Yesterday.

“We met on Wednesday and he barb me worst of it he wasn’t looking sick in my eyes
Only to receive a call he has passed away.
Estro De Barbguy who ever take your life
May he never see December this one hurt me to my stomach have lost many niggaz in uyo this one pain me over cos he was very humble and discipline.

“What jealousy would make anyone harm a very simple and easy going guy.
Oh dead you have took a friend and a brother from me �������.”

“He was a young hard working barber who was never interested in politics.

“It is said that he was poisoned and killed.

“He was an Uyo boy in Akwa Ibom State and the public will mourn him and forget about him within a week and move on.

“Be careful of your friends because young people are killing young people now with poison and not with guns and knives.”