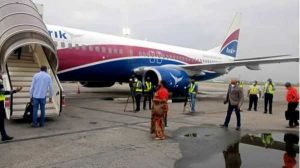 Scuffle broke out Friday night between passengers and Arik Air staff with the former blocking the boarding gate, preventing any other flights from boarding.

Serious drama ensued recently at the Nnamdi Azikiwe International Airport following the breakout of a fight.

According to Vanguard, it was a free for all at the Nnamdi Azikiwe International Airport, Saturday morning as management of Arik Air, citing “operational reasons”, repeatedly rescheduled its Abuja – Benin flight from Thursday till yesterday when it finally airlifted passengers at 10AM.

Scuffle broke out  Friday night between passengers and Arik Air staff with the former blocking the boarding gate, preventing any other flights from boarding.

Our correspondent gathered that passengers demanded that Arik Air adhere to stipulated travel regulations by putting them in a hotel since the flight was cancelled abruptly. However, the Arik Air team on ground said they could not meet the demand but promised to give affected passengers a 25 per cent discount on their next flight booking with the airline. The passengers rejected the offer.

Determined to make a statement , the passengers subsequently “detained” the Arik Air staff until their demand was met, prompting the intervention  of military personnel and officials of the Federal Airport Authority of Nigeria, FAAN.

Many passengers (many with young children) eventually slept overnight in the airport benches.

Saturday morning, the trouble continued with Arik Air again postponing the flight saying they were unable to get “aviation fuel” for the trip. Unable to bear another burden of delay,  the passengers, in protest, stormed the ticketing office, preventing sale of tickets.

They were finally airlifted at exactly 10AM.

A passenger who spoke to Sunday Vanguard anonymously said, “the rubbish we take in this country is intolerable in other parts of the world. Why would a flight billed for Thursday takes off on Saturday? It is a shame this is happening at a time we are told they are implementing the aviation sector roadmap.”