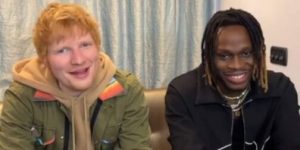 The remix, both audio and video is due for release on Friday, Christmas eve.

“British superstar Ed Sheeran and Fireboy are finetuning things ahead of the release of their collabo.

The international star could be seen effortlessly singing in Yoruba as part of the remix of Fireboy’s hit song Peru.

The remix, both audio and video is due for release on Friday, the Christmas eve.

In snippets on social media, Ed Sheeran is seen singing along with Fireboy: